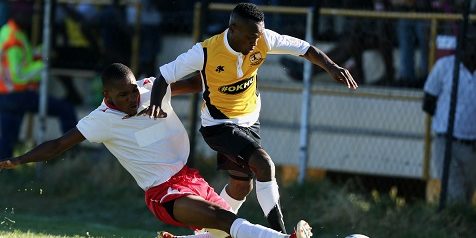 Okahandja United Football Club coach, Richard Garised, said their goal for the 2022/23 Debmarine Namibia Premiership is to collect maximum points in every match that will be played at their home ground.

Okahandja United won their first match of the season on Saturday when they put Otjiwarongo-based Mighty Gunners to the sword with a 2-1 victory at the Nau-Aib Football Stadium in Okahandja.
After a dominant display in the first half, where all their goals were scored, Gariseb told Nampa that he was satisfied with the match and his players’ performance.
“We know players have been off for three years, so we did not expect the best performance today. We plan to cement our position in the premier league this season by collecting three points from whoever comes,” Gariseb said, adding that they will make life difficult for whoever visits Okahandja.
Stanley Scheeffers, Okahandja United’s captain, told this agency that he was happy for the three points but their goal is to gain more points from each match this season and hopefully challenge for the premier league title.
Mighty Gunner coach, Gerhard Hengari, said they only started training this week but that cannot be used as an excuse for their defeat.
“Unfortunately, we did not get the goals as we had a better second half, but we are going back to training to correct our mistakes. We aim to challenge for the title as we are no longer minors,” said Hengari, adding that the recent result will not dampen his charges’ hopes for the season.
Other results from matches played in round one of Debmarine Namibia Premierships across the country saw Young Brazilian defeating Tura Magic 1-0 in Karasburg. Black Africa started their league campaign with a 3-0 defeat away to Life Fighters in Otjiwarongo, while Julinho Sporting had an upper hand when they beat Young African 1-0 at the Rundu Sport Stadium.
Meanwhile, the coastal derby between Blue Waters and Eleven Arrows played at the Jan Wilkens Stadium in Walvis Bay ended in a goalless draw.