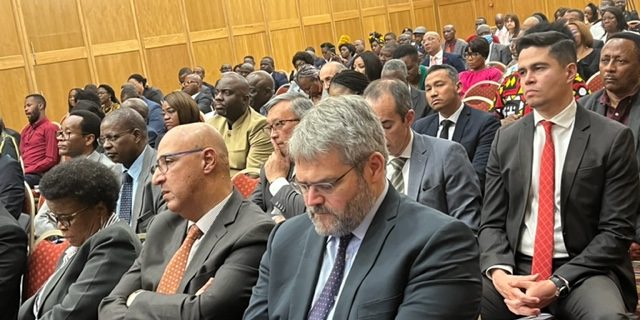 Namibia and Angola have for over four decades stood side-by-side, waging various battles in both countries and throughout, the bond between the two countries has remained firm.
One of the pillars of this bond was the former president of Angola, Antonio Agostinho Neto.
The poet, physician and politician who served as the first president of Angola (1975–79), was born on 17 September 1922 and died on 10 September 1979.
On Thursday, a centenary celebration in honour of Dr Neto was held in both Angola and Namibia in recognition of the contributions and the sacrifices made by the government and people of Angola towards the achievement of Namibia’s independence.
Neto is famously known for saying “Angola shall be on its own will, a revolutionary trench in Africa to Namibia, Zimbabwe and South Africa in the continuation of our struggle.”
This shows that he had the interests of other countries at heart and the independence of Namibia, Zimbabwe and the end of white minority rule in South Africa were practical reaffirmations of that undertaking, founding President Sam Nujoma said at the centenary celebration in Windhoek.
“There could never be enough time to share the warm and fraternal experiences we shared during our common struggle against colonialism and apartheid. The legacy Dr Neto has left to us continues to translate into stronger solidarity and relentless commitment toward a shared future of prosperity for our region and people,” said Nujoma.
On his part, Namibia’s Vice President Nangolo Mbumba described Neto as a selfless revolutionary, revered statesman and an African hero.
Mbumba said the government of Namibia considers Angola an important neighbour and serious strategic partner.
He reiterated the government’s commitment to further strengthen and solidify “the bilateral relations which continue to be reinforced by the ever-strong bonds of solidarity and friendship which happily exist between the two governments and their peoples.”
Meanwhile, Angola’s Ambassador to Namibia, Jovelina Imperial Costa, called on the two governments to teach the youth about the efforts and political experience of individuals such as Dr Neto, who marked the history of the people of the two countries in particular, and of Africa in general.
She said Neto knew that without the liberation of neighbouring countries, peace in Angola would always be threatened.
“Nowadays, we celebrate both what distinguishes us from others and what has always brought us closer to others. It is the celebration of an open identity, of a legacy whose presence goes far beyond Angola’s physical borders,” said the Angolan diplomat.
Luanda was the setting of the headquarters of Swapo since 1976, and Angola became a second home for thousands of Namibian freedom fighters during the country’s struggle for independence.
Dr Neto allowed Swapo to establish its military headquarters at Lubango, from where combatants waged the armed struggle against the colonial regime of South Africa.
In 1988 the combined troops of the People’s Armed Forces of Liberation of Angola (FAPLA), the Cuban Internationalists and the People’s Liberation Army of Namibia (PLAN) dealt a defeat to the invading South African army during the historic battle of Cuito Cuanavale in southern Angola.
The defeat of the South African troops forced the apartheid regime to the negotiating table, resulting in the independence of Namibia.
“The people of Angola demonstrated their kindness and humanity, and we will always remember and cherish the selfless contribution they made to the liberation of Namibia,” said Nujoma.
Hundreds of people, including ambassadors and high commissioners accredited to Namibia, as well members of the Angolan community, attended Thursday’s event.