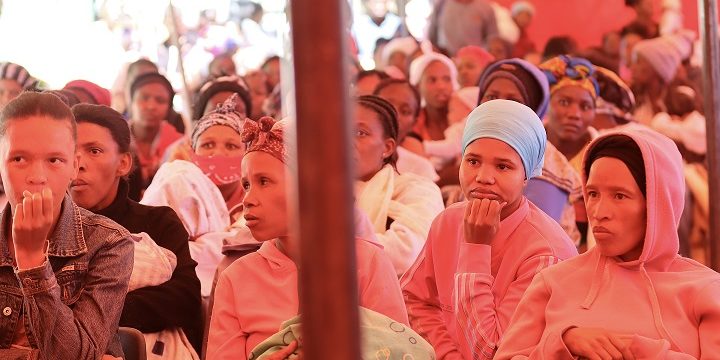 Nearly 300 mothers, pregnant women and adolescent girls from the Groot Aub community on Tuesday received dignity kits from the United Nations Population Fund (UNFPA).
The kits were handed over at Groot Aub, which is situated 40 kilometres south of Windhoek and where many in the community cannot afford basic essential hygienic supplies.
Speaking at the handover ceremony, UNFPA country representative Loide Amkongo said UNFPA efforts through the ‘Leaving No One Behind’ project aim to address the needs of the most vulnerable groups, particularly women and adolescents in the areas of sexual and reproductive health, and prevention and response to gender-based violence.
She explained that the project, with funding of N.dollars 7.4 million availed by the Japanese government, is aimed at supporting the government in achieving the Sustainable Development Goals (SDG) of ensuring universal access to sexual and reproductive health care and services; end communicable diseases such as HIV/AIDS and malaria, as well as ensuring universal access to sexual and reproductive health and reproductive rights by 2063.
Amkongo indicated that kits are handed over in line with the identified priorities of the neediest communities as selected by the Ministry of Health and Social Services. In Groot Aub, beneficiaries received items such as baby nappies; washing powder; soap and sanitary pads.
Receiving the items, 24-year-old Jonta Iitha who is a pregnant mother of one, said the donation comes in handy as the majority of young mothers in Groot Aub are unemployed and are unable to afford basic hygienic necessities.
“We really appreciate the items, at least now we have some essential needs for our babies,” she said.
Another beneficiary is Aina De-Almeida, who is pregnant and has two children. She said the dignity kit will complement her efforts to buy the essentials, noting that after losing her job meeting such needs has become difficult.
At the same event, Japan’s Ambassador to Namibia Hisao Nishimaki said post-COVID-19 it is important for the international community to strengthen and promote human security through universal health coverage.