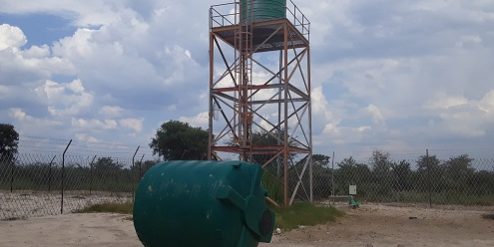 Hompa of the Mbunza Traditional Authority, Alfons Kaundu said safe, clean drinking water should be accessible to everyone.
Kaundu said this recently during the handing over of a water point to the community of Sitenda village in the Kavango West Region, by a fishing company called Mbunza Fishing of which Kaundu is a director.
The company is a recipient of fishing quotas from Government.
“My word to you is to take care of this water point while as a company we will continue to look for where there is a need for water assistance,” he said.
The traditional authority chief said he is aware that there is a big challenge for water in the inland and that people walk long distances to get water.
The community of Sitenda village and nearby villages depend on a borehole for water.
Sitenda village headman Elias Mbangu said people walk at least 3 kilometres to the nearest water point.
“We live far from the only water point and we have to walk or use donkey carts every day to get water. Mbunza Fishing has now eased this burden, we thank you so much,” the headman said.
Six villages in the Mbunza tribal jurisdiction so far received water points from the fishing company. In 2020 the company donated food parcels to 100 people in the Kapako Constituency.
As part of its social responsibility the company promised to set up an aquaculture project to help create jobs.
According to the Namibia 2011 Population and Housing Census report, access to clean drinking water in urban areas is at about 98 per cent, whereas the percentage of households with such water access drops to about 59 per cent in rural areas. Sixteen per cent of rural households rely on unsafe water from rivers or streams, whilst 13 per cent rely on unprotected wells.