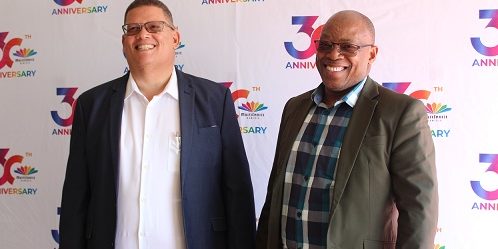 NBC3, the Namibia Broadcasting Channel’s entertainment channel, is now available on DStv and GOtv.
MultiChoice Namibia (MCN) revealed this during a press conference in the capital on Tuesday.
NBC3 (stylized as nbc3) is now available on DStv channel 287 and GOtv channel 93 to customers on all packages, as part of MultiChoice’s effort to provide the best local content to all of its customers.
Local broadcasters, according to MCN Managing Director, Roger Gertze, are the foundation of the TV industry, and with nbc3 now available on MultiChoices’ platform, it is responding to the ongoing consumer demand for quality local entertainment as part of its ongoing efforts to bring the best in entertainment to its customer base.
‘This collaboration with NBC is part of our ongoing successful carriage agreement with NBC as we continue to look for fresh content that is relevant in our market,’ he explained.
MCN and NBC announced earlier this month that 13 Namibian film concepts were chosen from over 200 submissions and will be aired on DStv and GOtv channels as part of many collaborations between MCN and NBC over the next year.
Stanley Similo, Director-General of NBC, stated that nbc3 is a family channel that caters to those who enjoy drama, telenovelas, and reality shows, as well as documentaries, world-class movies, and content that promotes local and international tourism in a variety of languages.
“nbc3 is our premier movie channel, and we are thrilled to include it in the MultiChoice packages. It will help us grow our revenue and, from an offering standpoint, we will be able to speak with potential advertisers,” he said.