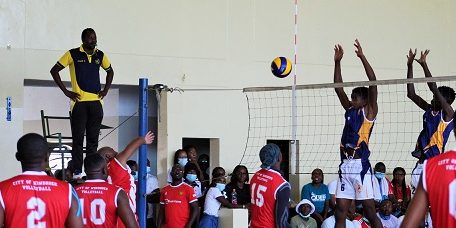 The Central Volleyball Association (CVA) League continued with some action-packed matches during week five of the second leg of the 2022 season at the Patrick Iyambo Police College training grounds.
The first fixture of round five saw the ladies team of Revival Volleyball Club (RVC) face off with Khomas NamPol Volleyball Club (KNVC) with RVC winning by three sets to two (3-2) on Wednesday.
On Thursday, Afrocat VC steamrolled past the National University of Namibia (NUST) Ladies team via a 3-0 set victory.
Friday saw two men’s fixtures between the University of Namibia (UNAM) against Afrocat D, with the students emerging victorious by 3-1 sets, and Namibian Defence Force B crushing NUST by a 3-0 set victory.
On Saturday, there were three fixtures for the ladies and four for the men, with ladies NamPol Otjozondjupa (NOVC) accounting for UNAM 3-2 while KNVC won 3-0 against NOVC.
The police ladies from Otjiwarongo (NOVC) redeemed themselves in their last fixture of the weekend by winning 3-0 against NUST.
In the men’s fixtures, Afrocat C thumped Kings VC 3-0, while NUST and Afrocat D played an exciting five-set thriller which saw the latter emerging as 3-2 winners.
NDF B then saw off the City of Windhoek (CoW) 3-2 in another five-set thriller before Kudos made light work of Afrocat C 3-1.
Round six of the season is expected to continue this week with many teams looking to secure their spots in the playoffs and contest for a position to represent the region at the Namibian Volleyball Federation Cup scheduled for later in the year.
On Thursday, KNVC returns to action against NDF B while on Friday Kings will clash against Kudos and Afrocat D faces NDF A in the men’s league.
On Saturday in the men’s league, UNAM will play Heritage and Kings face NUST, Kudos play NDF A, UNAM will face NDF B before clashing with City of Windhoek and NDF A will bring the curtain down on the week six fixtures when they play Afrocat C.
Three fixtures are scheduled for the ladies teams this weekend as the students, UNAM and NUST, will fight it out before KNVC meets Kudos and finally NDF clash against RVC.
All the fixtures are at the Patrick Iyambo training grounds.