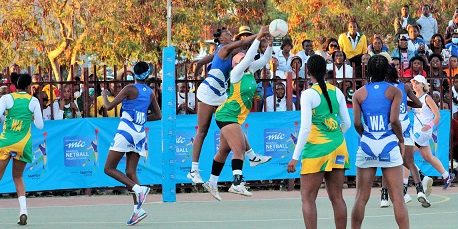 The second leg of the 2022 Namibia Netball (NN) Premier League season returned with a bang at Kuisebmond Stadium in Walvis Bay on Saturday, with rounds one and two of the action producing fireworks.
The first match of the day saw the Navy clash with the rebels and the home team taking a 13-07 lead in the first quarter.
The Navy extended their lead to 28-17 in the second quarter and drew even further away in the third quarter to 42-24 before registering an emphatic 54-38 victory at the end of the match.
The second match saw Blue Waters face the Namibia Correctional Services (NCS) and the latter coming up victorious by 52-23.
Up next was Afrocat Lions against another coastal team, Eleven Arrows who took advantage of the home advantage to win 33-29.
Grootfontein then made light work of Young Stars defeating them 36-28 before the Namibian Navy clashed with Tigers in a closely contested fixture.
That match ended 45-40 in favour of the Navy side.
The next fixture was between NCS against Northern Fly Ballers, with the latter winning by 52-22 points.
Up next was Mighty Gunners against Young Stars and the army team easily dispatched their opponents by a 58-24 scoreline.
Otjozondjupa NamPol lost to Rebels by a close scoreline of 40-43 before the last match of the day pitted Blue Waters and Northern Fly Ballers with the coastal side winning by a single point in a 34-33 result.
On Sunday, action resumed with Otjozondjupa NamPol losing to Tigers by a 50-34 scoreline before Mighty Gunners accounted for Eleven Arrows by a 54-25 scoreline.
Afrocat Lions triumphed over Grootfontein by 45-33 points before the Namibian Navy accounted for Northern Fly Ballers by a 53-29 scoreline while the NCS steamrolled over Young Stars in the last fixture of the weekend.