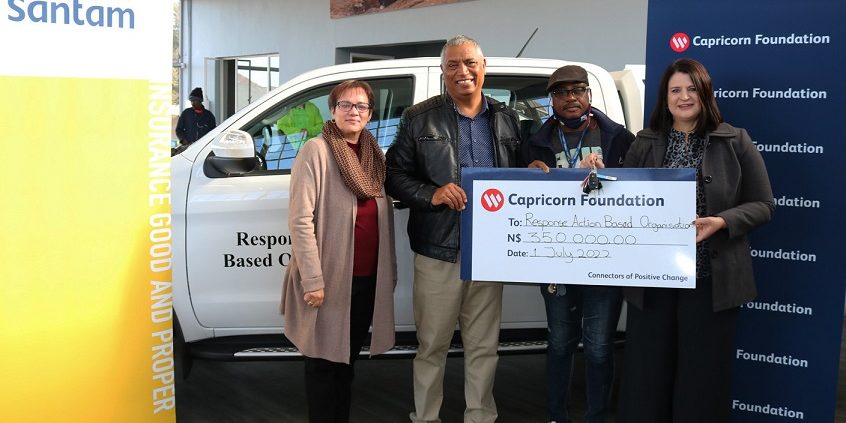 By donating a vehicle to the Response Action Based Organisation, the Capricorn Foundation has helped to reduce the occurrence of social ills such as violence, neglect, abuse and suicide attempts in local communities.
The organisation responds to various incidents in all areas of Windhoek and assists those involved in obtaining the necessary assistance.
The safe and dependable vehicle will enable the Response Action Based Organization to respond quickly to reported cases in all areas of Windhoek (particularly in difficult-to-reach locations) and rescue victims.
The organisation will also ensure that those who are victims of gender-based violence have access to and receive the services they require.
On Wednesday, Marlize Horn, Executive Officer of the Capricorn Foundation, told Nampa that the project was born out of a need in the Windhoek community for quick and effective intervention, when incidents of domestic violence, neglect or abuse occur.
She explained that similar to a first responder service, the organisation intervenes when incidents occur, providing medication, rescuing victims, transporting them to hospitals, and referring them to necessary service providers, such as social workers.
According to Horn, the project was introduced to the Capricorn Foundation by its CSR partner, Imago Dei and has so far assisted 1,686 individuals between 01 April 2021 and 28 February 2022, with the positive impact extending to these individuals’ families and the community in general.
“As a connector of positive change, the Capricorn Foundation is proud to have enabled Response Action Based Organisation to carry out its mandate and support the curb of violence in our communities,” she said.
Zackary Inedu Itodo, Founder of Response Action Based Organization, urged public members to report incidents as soon as possible by calling 0853963963, so that necessary interventions, transportation and referrals can be provided before lives are lost.
‘This is not my vehicle; it is for the community, and it will be used properly by the community and the police. It’s about working together to save a child or a vulnerable person,” he explained.