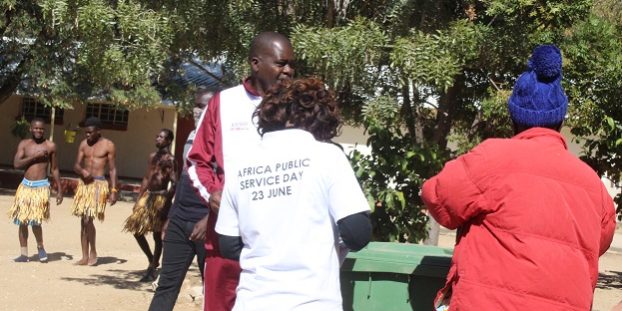 More than 300 civil servants from various Offices/Ministries and Agencies (O/M/As) on Thursday gathered at Otjiwarongo in the Otjozondjupa Region to celebrate the 2022 Africa Public Service Day.
The day was organised by the Office of the Prime Minister in collaboration with the United Nations (UN) and attended by government employees from across the country, who celebrated the day with various traditional dances, cultural performances and speeches.
The OMAs which included the Ministries of urban and rural development, health and social services among others, as well as the Namibian Police Force, home affairs department, Namibia correctional services, regional councils, and Roads Authority, all erected stalls at the event where they displayed brochures and leaflets outlining their mandates in government.
In a keynote message read on her behalf, Prime Minister, Saara Kuugongelwa-Amadhila reminded the public servants to always see to it that they acquaint themselves with mostly the ten 10 principles of the public service charter.
She also advised that they always maintain work ethics, and professionalism and demonstrate a balanced integrity mind when dealing with the public resources.
The Premier went on to say: “In Namibia, the government is the largest employer of more than 95 000 workers who are specifically employed and salaried to deliver the quality services to the nation,” and urged young professionals, graduates and specialists to join the government’s public service where they would establish themselves and serve the general public with their new skills, innovations and dedication.
Several speakers from the UN and different political levels in the country also commended the government on its commitment to serving the people through public servants.
The platform was also used to pay homage to all those Namibian public servants who lost their lives in line with their work due to the COVID-19 pandemic outbreak.
The Public Service Day was officially recognised in Namibia as an official event in 2016 after the country had ratified the day at the African Union and UN in 2011 for it to be celebrated on 23 June each year.