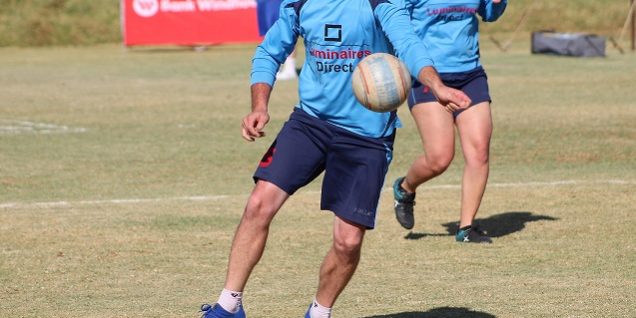 Cohen Fistball Club (CFC) continued to dominate the Bank Windhoek Fistball League when it won the third round over the weekend in Swakopmund. CFC 1’s win secures its participation in the National League A Playoffs. Swakopmund Fistball Club (SFC) A and Sport Klub Windhoek (SKW) A won the Under 16, and 13 categories.

In the finals, CFC 1 started strong and won the first set. After changing sides, SFC 1 took advantage of CFC 1’s defensive weaknesses and equalized and like in the preliminary round, inflicted another set defeat on CFC 1. CFC 1 stepped a notch in the third and fourth sets and beat SFC 1 3:1. Nevertheless, SFC 1 collected ten crucial points in the championship race and catapulted itself from fifth to third place in the log.

The matches in Group A were unexpected. The underdog SFC 2 caused a major upset by beating the record champions SKW 1 with a 2:0, the first victory for SFC 2 against SKW 1 since the league’s formation in 1967. SKW 1 could only win one set in the remaining two encounters and ended up in fourth place in the preliminary round. Ultimately, SKW 1 placed fifth and six points behind clubmates SKW 3 in the table, who are in the fourth place. Since only one league round is left, it will be tough for SKW 1 to qualify for the National League A Playoffs. SFC 2 finished third while CFC 1 was the Group winner ahead of SFC 1.

Group B was dominated by CFC 2, while SKW 3 won against CFC 3 and finished second in the group ahead of the third team of CFC.

In the Under 16, SFC A collected the most points on home soil and passed SKW A in the table. SFC B and SKW B took third and fourth place, respectively. In the Under 13 category, the guests from SKW A were unstoppable and secured the tournament victory. The second team of the SKW juniors ended up in second place. SFC A, who won the second league round in Windhoek, had to settle for third place.

Christian Knobloch from SFC 2 was named the Player of the Day in the adult category, while Emma Hess took the youth division accolade. Next on the Bank Windhoek Fistball League is the fourth-round match day on Saturday, 23 July 2022, in Swakopmund.