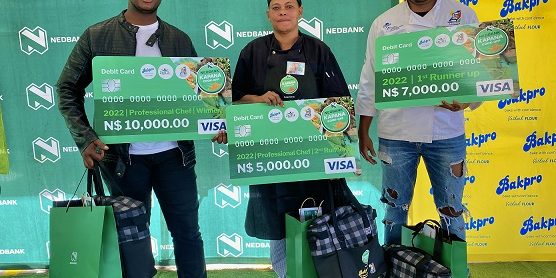 Chef Johannes Tieties of the Avani Windhoek Hotel and Casino was crowned the overall winner of the Nedbank Kapana Cook-Off 2022 Professional Chef competition during the second preliminary round at Windhoek’s Soweto Market on Saturday.
This preliminary round included a once-in-a-lifetime Nedbank Kapana Professional Chef round, in which 17 professional Namibian chefs competed for top honours.
A judging panel of chefs from the Namibian Chefs Association evaluated the professional chefs’ kapana dishes based on preparation, presentation and taste.
Tieties took home a cash prize of N.dollars 10 000.
Chef Bendall Masambo of Zenzi’s Coffee Shop was in second place, while Chef Cecilia Smith of Protea Hotel Thüringerhof was in third place.
Nedbank Namibia Communications and PR Manager Selma Kaulinge told Nampa on Tuesday the Nedbank Kapana Cook-Off Central Preliminary Round saw 32 amateur chefs compete to advance to the competition’s final, where they will compete for the grand prize of a mobile food truck worth N.dollars 100 000.
Modestu Fenivamwe, Ester Silas and Hasheni Mandume were chosen as the top three amateur cooks after impressing the judges with their dishes. They will compete in the Nedbank Kapana Cook-Off final, which will take place in Ongwediva during the Trade Fair in August.
Kaulinge also stated that the final preliminary round of the 2022 Nedbank Kapana Cook-Off competition will be held in Ongwediva on 25 June. Entries for the Northern round are now open and can be found on the Nedbank Namibia website or at any Nedbank branch countrywide.
The 2022 Nedbank Kapana Cook-Off final will be held at the Ongwediva Annual Trade Fair on 27 August, where the winner will be awarded the opportunity to either start-up or formalise their existing business with the assistance of the winning prize, which includes a fully-fledged mobile food truck and a cash prize of N.dollars 10 000.
The Nedbank Kapana Cook-off is organised in collaboration with Bakpro, Agra, Coca-Cola, and the Namibian Chefs Association.

The NHE calls on residents to apply for housing construction
August 10, 2022