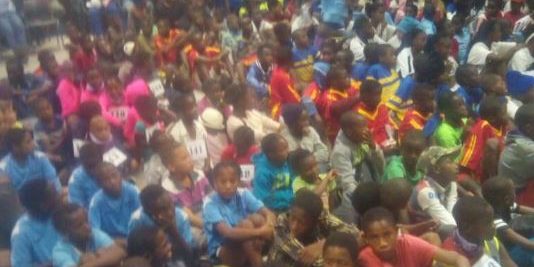 RMB Namibia recently supported the PAY (Physically Active Youth) community outreach sports day, an event aimed at keeping young people engaged through active sport participation. “As a responsible corporate citizen, we are part of a campaign against underage drinking. RMB, through the FNB Foundation, supported PAY with an amount of N$ 370 000. The first initiative under this sponsorship being a sports day, which involved a total of 26 teams, 52 coaches and 38 volunteers”, says Rehabeam Auala Jr, Chairperson of the RMB Corporate Social Investment Committee,

Auala added that unemployment, especially amongst the youth, is high in Namibia. “Youth unemployment figures are concerning and demotivating to youngsters who wish to enter the formal job market and make a meaningful contribution to the country. Faced with such prospects it is understandable that some youngsters might end up on the wrong track, resorting to crime, drug or alcohol abuse. We hope that our contribution will encourage some of them to stay positive and keep healthy.”

The RMB CSI team assisted with fruit packages and field work while at the same time educating the youth about the negative effects of drinking alcohol. The event reached out to youth from different communities, ages, and sport codes and approximately 320 children and youth from Katutura and the neighbouring communities took part. The audience enjoyed a spectacular exhibition of BMX, Chess, and football. PAY is an organization, established to give young people the tools they need to make informed choices in a fast-evolving world.